The European Commission (EC) has estimated that digital innovation will increase the annual European industrial output by €110 bn. So far, Europe has on average only reached 12% of its digitisation potential, ranging from 10% in Germany to 18% in the UK. Europe is underperforming relative to the US, which has reached 18% of digitisation potential.  The European digital frontier, represented by the Information and Communications Technology (ICT) sector is only 60% as digitised as the US frontier. 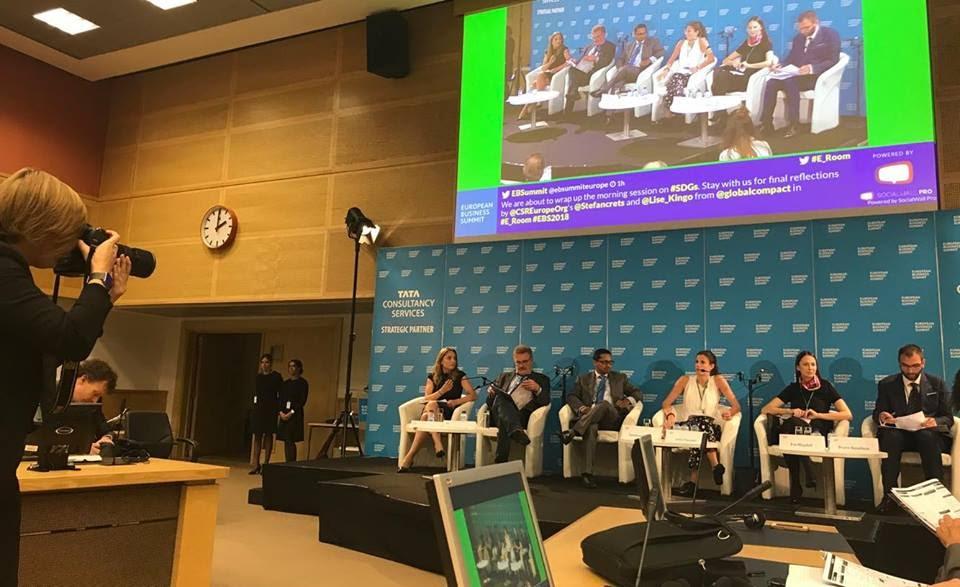 In April 2016 the EC launched its Digitising European Industry (DEI) initiative, with the intent of reinforcing EU’s competitiveness by embracing digital innovation across all European industry. The Commission and Member States are investing €50bn by 2020 on digitization strategies. Yet, a further push from both EU policy makers and businesses is needed to fully tap into the potential of digitisation and keep up with the pace of the digital transformation.

At the beginning of the discussion, Mr. Simon noted that technology has become so democratized that it is in principle available to all companies. However, in reality only 16% of SMEs in the EU are highly digitised, compared to 42% of large companies. The fast developments in digital technology make it difficult for SMEs to adopt and integrate them into their processes. Ms. Jakimowicz added that very simple, for instance cloud-based, solutions are available to SMEs. Yet there are big challenges even with adoption of these simple solutions – in 2017, only 36% of enterprises of the EU28 used business software for information sharing. Both Mr. Simon and Ms. Jakimowicz agreed that businesses need to understand the urgency to digitise which often starts with a mindset change of business leaders. Under the DEI initiative, Digital Innovation Hubs have been designed as tools to support in particular SMEs in their digital transformation. Acting as a one-stop-shop, they provide a series of support services and access to knowledge, methods and software, technology platforms, prototyping solutions and testing facilities.

Mr. Peltomäki expressed concern over the private sector investment gap in the EU compared to countries like China or Korea. Bruno Basalisco added that industry expenditure on computers accounts only for 1.3% in Europe compared to >2% in the US, Japan and Korea. From a venture capitalist point of view, there may not be enough good companies in Europe to invest in. Ms. Jakimowicz explained that some VCs perceive the European market as saturated due to available bank funding from institutions like the European investment bank. However, banks as investors are less focussed on R&D and innovation than VCs. To secure sufficient investment, Eva Maydell highlights that the EU needs to mobilise capital around Europe by pushing ahead with the capital markets union (CMU). The CMU aims to complement bank financing with deep and developed capital markets,  unlock the capital around Europe, and to establish a genuine single market for capital. An action plan for CMU was launched in 2015 as part of the Investment Plan for Europe, however, implementation is delayed. The Investment Plan for Europe, the so-called Juncker Plan, has three broader objectives: (i) to remove obstacles to investment; (ii) to provide visibility and technical assistance to investment projects; and (iii) to make smarter use of financial resources.

Ms. Maydell opened this section with reference to a statistic that Europe needs another 750,000 ICT practitioners in 2020 to match the investments in technology and resulting demand for e-skills. According to Bruno Basalisco only 15% of manual workers compared to 47% of non-manual workers have sufficient digital skills. As of 2017, 88% of workplaces have not taken any action to tackle the lack of digital skills of their employees. High costs seem to be the main barrier encountered when undertaking actions to deal with digital skills gaps. Mr. Basalisco explains that investing in knowledge capital can be risky for businesses and difficult to quantify in business cases. Ms. Maydell stressed that Europe must be at the forefront of the upskilling revolution to keep businesses operating on the continent. The focus should not only be on digital skills but also on other skills like learning to learn, being adaptable and creative. To this end, more data related to skills and an upgrade of Europe’s educational models are needed. According to Ms. Maydell, 60% of European teachers feel unprepared to teach the skills businesses need, especially soft skills. Traineeships and integrating trainings for communication or management as part of any course, starting already in high school, may be part of the solution. However, education is still a very conservative system, requiring strong political vision and leadership and a difficult policy conversation. Mr. Basalisco added, that complementary ways such as “using digital to teach digital” are needed due to pace of transformation. Mr. Peltomäki briefly mentioned the New Skills Agenda for Europe, which was adopted by the Commission on 2016 and launched 10 actions to make the right training, skills and support available to people in the EU. Those actions include the Digital Skills and Job Coalition as well as the Blueprint for Sectoral Cooperation on Skills. The former was launched to support co-operations among education, employment and industry stakeholders while the latter addresses skills intelligence and skills shortage in specific economic sectors.

Society and individuals need to be prepared to fully embrace digital transformation. Even though consumers benefit from digitisation, many will need to face challenges as workers at the same time. The adoption of robotics have raised wide-spread employment concerns. In fact, robotics have, however, attracted production back to Europe, reducing total employment cost while creating new jobs. Germany and Sweden are the forerunners of use of robotics in Europe, while maintaining one of the lowest unemployment figures in the Union. Ms. Maydell suggests that most citizens are resistant to change and while there won’t be less jobs, all jobs will be different and require digital skills. Hence policy makers need to address worries of citizens in an honest public debate – with skills, not jobs at the core. Ms. Jakimowicz concluded that it is important for policy makers and media to create a positive narrative.

Maxi Pethö-Schramm was a YEL delegate to the 2018 European Business Summit. Maxi currently works as a Consultant at McKinsey & Company and holds a degree in Management from the London School of Economics and Political Science. Views are her own.

“This is the starting point for the European awareness of our own role in the world.” – Federica Mogherini

The Effects of the Emergence of Renewable Energies on Business Models in today’s Power Industry: A Primer