Deprecated: mysql_connect(): The mysql extension is deprecated and will be removed in the future: use mysqli or PDO instead in /var/www/vhosts/younglead.eu/httpdocs/wordpress/wp-includes/wp-db.php on line 1142
 UNFCCC / COP Summits | Young European Leadership

In recognition of the need to combat climate change at a global level, the United Nations launched the UN Framework Convention on Climate Change (UNFCCC) at the 1992 Rio Earth Summit. The UNFCCC entered into force in 1994. Signatories to the UNFCCC, or ‘Parties’, have met annually since 1995 at the Conference of the Parties (COP) summits to review progress. The adoption of the Kyoto Protocol in 1997 was a major landmark as it committed Parties of the UNFCCC to legally binding targets for the reduction of greenhouse gas emissions.

In 2015, the Paris Agreement was signed at the COP21, committing countries to “holding the increase in the global average temperature to well below 2°C above pre-industrial levels”. This is the first time that an explicit target to limit global temperature increases has been included in a UNFCCC agreement. The Paris Agreement entered into force in November 2016.

What is COP24? CP24 is the name given to the 24th Conference of the Parties to the UN Framework Convention on Climate Change (UNFCCC). Entered into force in 1994, this convention is now almost universally ratified. The “Conference of the Parties”, or “COP” is held every year in order  to ensure effective implementation through the reviewing of its provisions’ implementation by parties.

One of the most important challenges of the 24th Session is to adopt a package ensuring the full and effective implementation of the Paris Agreement, which entered into force in November 2016.

Poland was selected to host the COP 24 during the 22th Convention in Marrakech. It will be its third time holding the presidency of the Climate Convention, proving its undeniable commitment to the Convention and to Climate Change. Poland will take this opportunity to demonstrate its leadership in the field of climate change. In fact, Poland has managed to reduce its CO2 emission by 32% instead of 6% asked by the Kyoto Protocol. Poland will also challenge other countries on the project of “Forest Carbon Farms”, proving that neutrality in terms of greenhouse gas emissions can be attained. 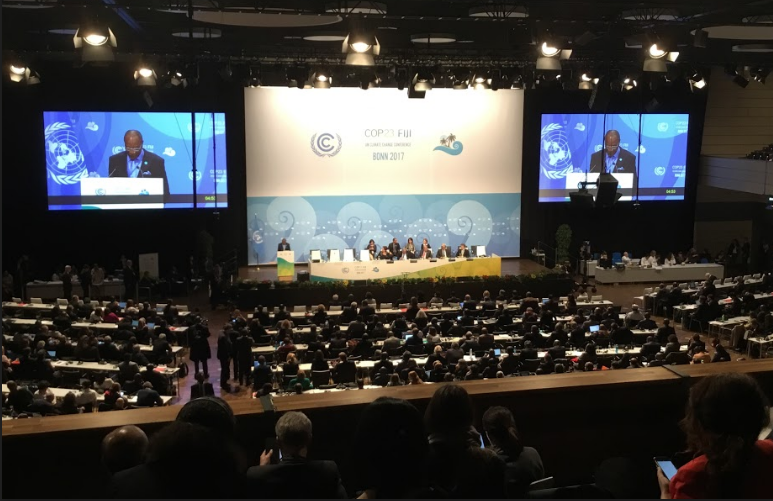 As an official observer organization to the UNFCCC, YEL is sending a delegation for the fourth time to attend the COP. This year the summit is hosted by Poland, and will take place from December 3rd to 14th in Katowice, Poland.

As a YEL delegate, you will be able to participate to one out of two weeks of the COP24. YEL is looking for young people who have a particular interest in climate change, the current challenges to the environment and/or undertake an activity in this area of expertise. We are also looking for media delegates who will be in charge of the communication output, as well as documenting and video making during and after the event. If you feel like it could be you, do not hesitate to apply!

Please note that the conference entrance fee is covered, however, all other costs (travel, accommodation…) will be at the expense of the delegates.

The main aim of the YEL delegation to the UNFCCC conferences is to raise awareness of the causes and implications of climate change among current and future young leaders in Europe.

With this goal in mind, YEL delegates’ role includes raising the visibility of young people at the COP and establishing YEL as regular attendee to the summits. Outreach to other youth NGOs (YOUNGOs) and expanding YEL’s network to the Parties and other attending observer organizations is a key part of this. Equally important for the delegation is to generate communications outputs, such as articles, blogs, social media content or seminar materials that can be used to inspire and inform.

YEL delegates have several responsibilities before, during and after the conference:

Before the conference, delegates will coordinate their work in regular communication, such as bi-weekly skype calls, and distribute tasks and deliverables among themselves.

After the conference, and with the YEL team’s support, the delegation will leverage contacts made at the conference and their own networks to disseminate these materials. As an example of such outputs, see media created by the COP23 delegation.

If you want to know more about COP 24, do not hesitate to visit their official website: http://cop24.gov.pl/ and their facebook page: https://www.facebook.com/COP24Poland/

As an official observer organization to the UNFCCC, YEL sent a delegation for the third time to attend the COP. This year the summit was hosted by Fiji, and tookplace from November 6-17

As an official observer organization to the UNFCCC, YEL sent a delegation to attend the COP conference in 2016. To get an insight, watch the videos below, the delegation’s daily video blog or read the COP22 delegation’s insights and analysis here.

Round-up of the COP22 by delegation lead Alex Pfeiffer.

The COP21 was held in Paris from November 30 to December 12, 2015. Negotiations resulted in the adoption of the Paris Agreement on December 12, governing climate change reduction measures from 2020. The adoption of this agreement ended the work of the Durban platform, established during the COP17. The agreement will enter into force (and thus become fully effective) only if 55 countries which produce at least 55% of the world’s greenhouse gas emissions ratify the Agreement. The COP21 was the first UNFCCC conference which was attended by a YEL delegation.

Young European Leadership attended the COP21 as a member of the Civil Society Observer Organisations. The Conference was a 12-day gathering of United Nations Framework Convention on Climate Change (UNFCCC) members, during which YEL delegates had the opportunity to take part in several activities: follow most aspects of the negotiations as observers; participate in side events of other climate stakeholders and organisations (e.g. International Energy Agency); and contribute to the Working Groups of the Youth constituency of the UNFCCC by drafting statements, organising activities, and informal lobbying on behalf of Youth Non-Governmental Organizations.

The delegates also attended the Conference of Youth (COY11). The COY is a 3-day gathering of young people that takes place every year, prior to the Conference of Parties (COP). Its purpose is to allow young leaders to voice their opinions on climate change just before the important climate conferences. During the COYs, young climate activists of any background have the opportunity to share their experiences and projects with other like-minded youth from around the globe, and engage in collaborative activities.